The DIS by and for women in Chad

The DIS by and for women in Chad

N'Djamena 9 February 2009 --In accordance with Security Council resolution 1778, the United Nations Mission in Central African Republic and Chad (MINURCAT) is mandated to select, train, advise and provide support to elements of the Chadian police and gendarmerie that will be part of the Détachement Intégré de Sécurité (DIS). The DIS is a humanitarian protection force in Chad specially trained by MINURCAT currently being deployed in eastern Chad. This force is responsible for providing security inside the refugee camps, the Internally Displaced Persons (IDP) sites and humanitarian organizations.

The DIS consists of a total of 850 elements deployed in 12 camps spread across 6 stations and 12 sub stations in eastern Chad. Within those entities, protection cells for women and children are in place. They were created to protect women and children with a view to preventing and investigating cases of sexual abuse and domestic violence. The cells also provide guidance for psychological, medical and legal support to the victims.

The members of these cells have three main responsibilities: 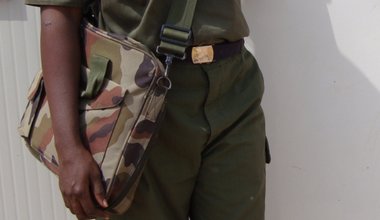 Considering the important role played by women in the multidisciplinary and integrated management of women victims of sexual violence, the Gender Focal Point of the United Nations Police multiplied meetings with Police officials and the Chadian Gendarmerie to sensitize them on the situation. Chadian partners made commendable efforts to provide a significant number of female elements to the DIS. The second graduation included more than 60 women. The top 8 graduates were women.

Djmanmitta Damaris Bagaou is an officer of the DIS. She came in at the top of her class during the second training. Married with three children, she is a trained officer and was educated at the military school "Groupement d'écoles militaires Interarmées (GEMIA)" in N'Djamena. She also sought to improve her skills by completing internships abroad (in Cameroon and Ghana) on law enforcement, peacekeeping and conflict management.

Regarding relations between men and women within the DIS and Chadian society, Captain Bagaou mentioned problems related to cultural issues: "To facilitate our relations, I try to bring new elements; articles of the Constitution, I always refer to the various resolutions of the United Nations (Resolutions 1325 and 1820) which attach a great importance to women and Gender. When I am misunderstood, I am forced to use those texts. They say that women remain women but in missions I believe that women carry out their tasks and duties with greater ease than men. As the core mission of the DIS is to ensure the security of refugees, displaced persons, vulnerable persons, youth and elderly, I think that this work is better suited for women especially in cases involving sexual abuse because it is easier for a woman to confide in another woman ".

Given her experience with the DIS, Captain Bagaou recommends to female police and gendarmerie staff not to give up and fulfill their mission with pride. She asks men to see women as their sisters, their wives, their colleagues and not to underestimate them. "I feel that women have the same intellectual coefficient as men. They can do the same work, assume the same responsibilities. And finally, men should respect women because without women, there is no life."