End of Peer Educators’ Workshop on HIV/AIDS for UNPOL

End of Peer Educators’ Workshop on HIV/AIDS for UNPOL

N'Djamena, 14 November 2008 -Some thirty UNPOL staff, comprising six women, took part in a five-day training organized by the HIV/AIDS Unit. This training was organized in collaboration with the Sections of Gender, Human Rights, and Conduct & Discipline, together with the support of the Training Unit.
The aim of this workshop was to promote peer education, a prevention-based method conducted on a set of individuals from a given social group who will engage their peers in embracing behaviors and practices that can protect them against Sexually Transmittable Diseases (STD) and HIV/AIDS. Once trained, these peer educators will perform the following tasks:
- Help their peers adopt less risky practices regarding STD/HIV/AIDS;
- Organize discussions around risk-taking situations;
- Provide their peers with information about where to get good condoms;
- Convince and direct their peers to do the test for HIV/AIDS .
At the end of the training, one participant, Mr. Aboudoulaye M. Diallo, noted that "valuable information had been imparted during these five days". Dr. Maria Rosa Hernandez, Chief of the HIV/AIDS Unit, declared that «the training by peers is very useful because, it calls on the ability of the peer educators to replicate the training and to pass on the same information in the field, to your peers, thus to police officers like yourselves".
Mr. Diakharidja Bakayoko, who was representing MINURCAT's Police Commissioner, said he was impressed by the pedagogical methods used by the instructors. Mr. Bakayoko also thanked the UNPOL for their interest in this training and expressed hope that "this training will be repeated, not only in the field, but also to the entire UNPOL staff, and especially to the trainers that we are". 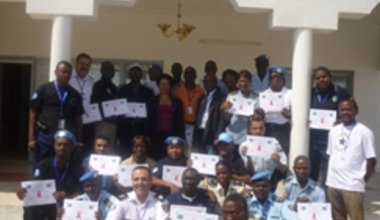